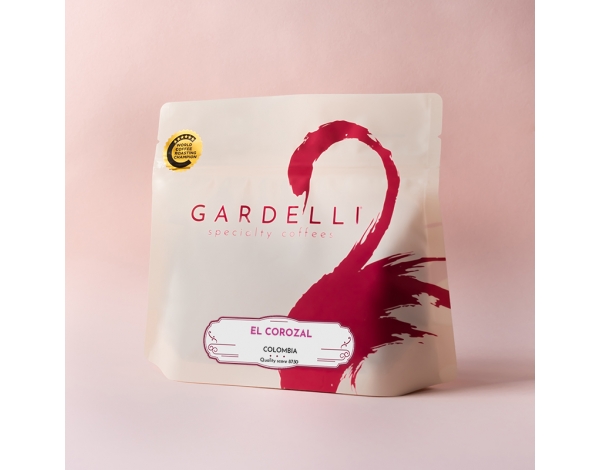 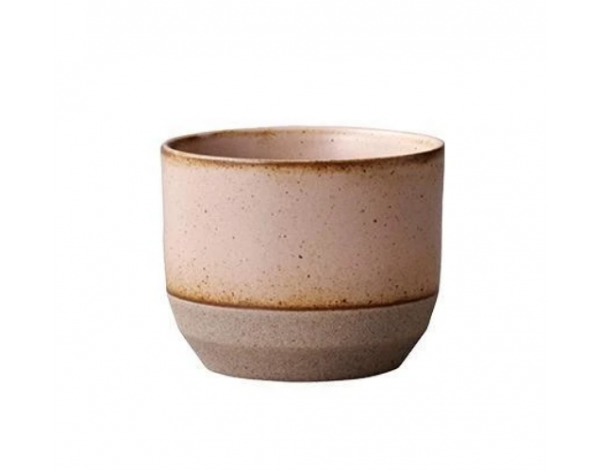 With over one hundred years of experience in producing the finest coffee in Brazil, the Andrade family started Sao Silvestre in the mid-1990s. Fazenda São Silvestre is located in the north of Minas Gerais, in an area known as the Cerrado Mineiro on the border with Bahia state.
The Andrade's first farm in Paranaiba, Cerrado Mineiro, is Fazenda Capim Branco; since the 1970s the family has been very active in establishing new farms so as to expand their cultivation area. The family acquired São Silvestre farm during this period of expansion.

In the past couple of years, the family's path to improving their production lead them to build raised beds for drying. Using raised beds proved to be a success, demonstrated by the scores obtained in both Cup of Excellence and Regiao do Cerrado competitions. There is a BSCA standard cupping lab at the farm, where physical and sensorial analysis is carried out by qualified cuppers.
Combined with the natural conditions of the region, meticulous crop management, forward-thinking crop planning and post-harvest selection, the product from all Andrade family farms is excellent quality, award-winning coffees that are appreciated both within Brazil and internationally as some of the best coffee the country has to offer. 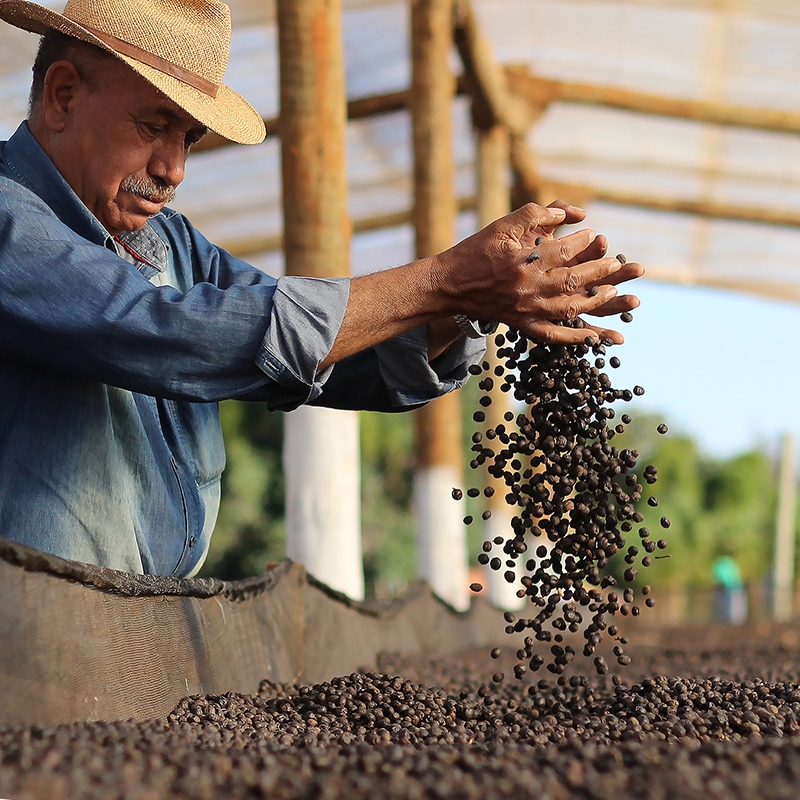 Catuai is a cross between highly productive Mundo Novo and compact Caturra, bred by the Instituto Agronomico (IAC) of Sao Paulo State in Campinas, Brazil in 1949. It was released in 1972 after pedigree selection (selection of individual plants through successive generations) and is widely cultivated up to this date.

Outside of Brazil, it was first introduced in Guatemala in 1970, even before the release in Brazil. Currently Catuai accounts for around 20% of the country's coffee total production.

It is also widely cultivated in Honduras, where it was introduced in 1979 after extensive tests by Instituto Hondureño del Café (IHCAFÉ). It was released commercially in 1983, after IHCAFÉ selected two lines for planting. In Honduras today, Catuai accounts for nearly half of the Arabica coffee in cultivation. Researchers at IHCAFÉ are actively engaged in breeding with Catuai and creating hybrid crosses between Catuai and Timor Hybrid lines.

Catuai is also economically important in Costa Rica, where a yellow-fruiting Catuai was introduced in 1985, and its descendants have spread widely through the country.
It has a negligible presence in other Central American countries.

The plant is highly productive compared to Bourbon, in part because of its small size, which allows plants to be closely spaced - it can be planted at nearly double the density. Because of this characteristic, the introduction of Catuai partly led to the intensification of full-sun coffee cultivation in Central America in the 1970s and 1980s. The plant’s shape also makes it relatively easy to apply pest and disease treatments. It is characterised by great vigour and low height, while it is less compact than Caturra. There are yellow-fruited and red-fruited types, with numerous variation at present. Catuai's downside is that it is highly susceptible to coffee leaf rust. 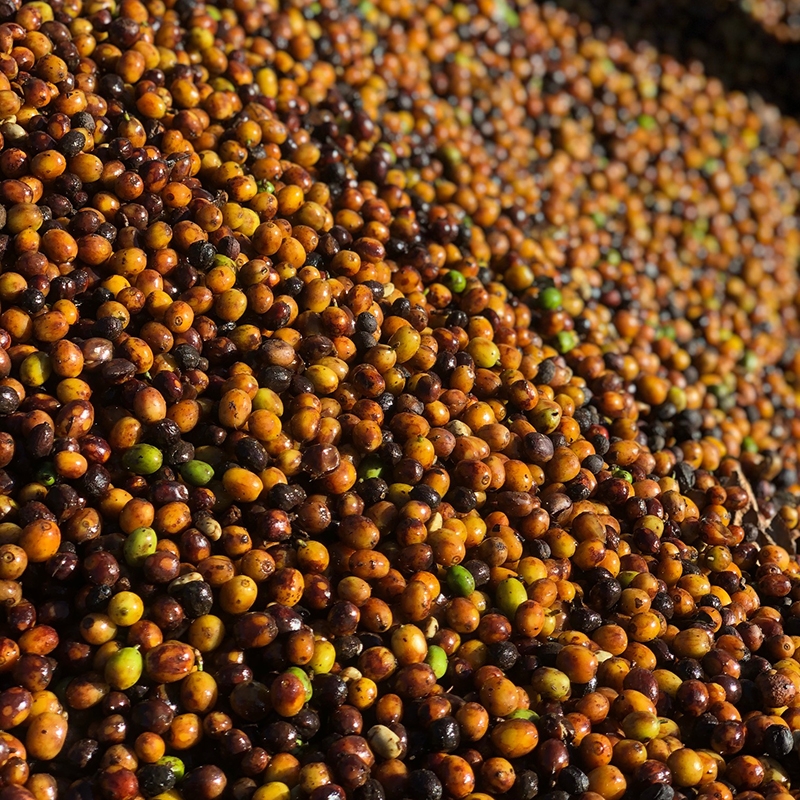 The cherries are collected with the help of mechanical harvesters and brought to the farm. They are carefully selected and graded, all impurities are removed and the cherries are fermented inside open air tanks.
After fermentation, the cherries go straight to raised beds, where they are slowly dried over the course of two weeks. During this time they are turned multiple times during a day, and further manual selection takes place. When the beans are dried, the dried skin and parchment are removed by the on-farm dry mill. 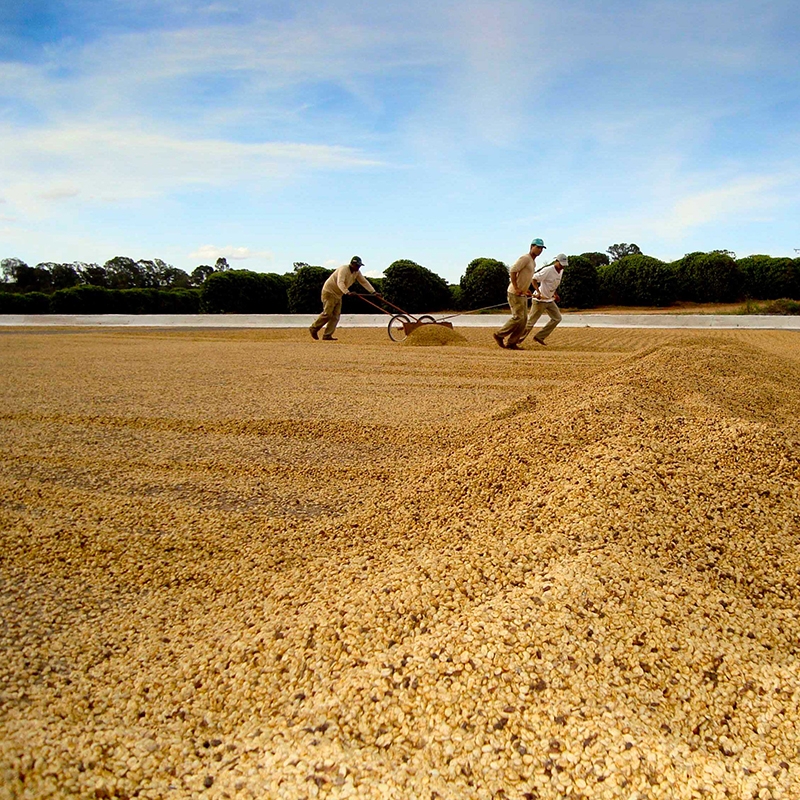 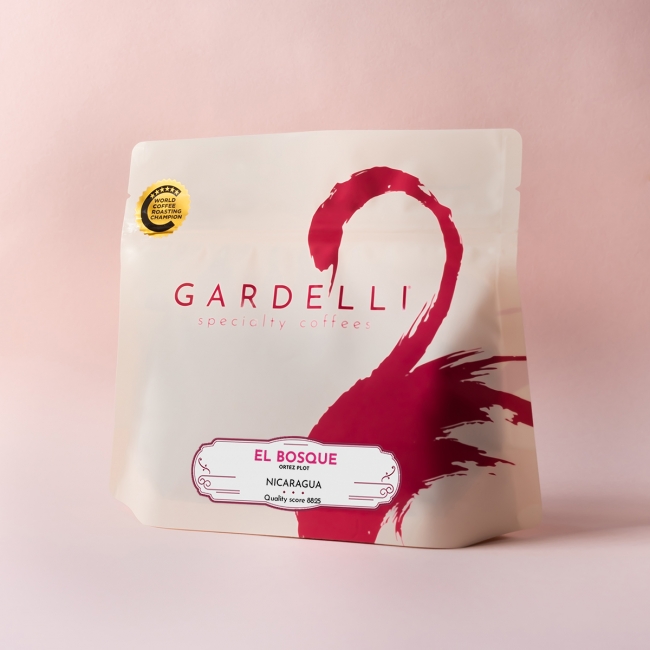